A Whale of a Festival 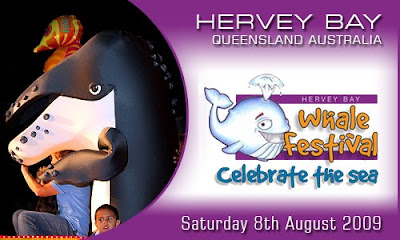 Hervey Bay turned on a Whale of a Festival for us on Saturday 8th August 2009. 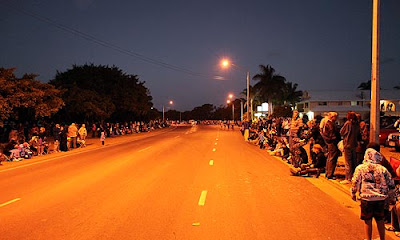 There really was quite an impressive turnout for the Hervey Bay Whale Festival, with more people than I thought possible, crammed onto the street to watch the parade and later indulge in all the delights of the fair. 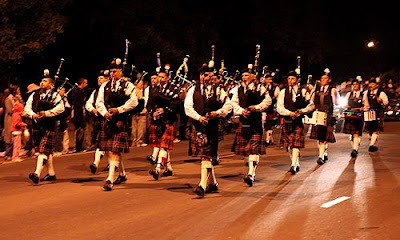 Of course, we started with the traditional Bag Pipe Band, just to make sure everyone was awake, after sitting in the gutter for hours waiting for the parade to begin. 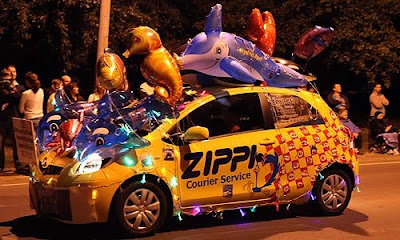 Local businesses stuck a range of blow up toys, some Christmas lights and other oddities to their vehicles and called them a float. 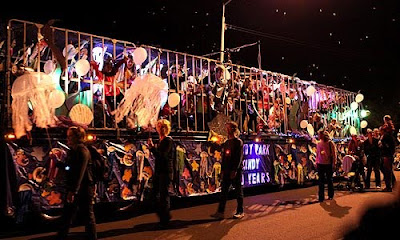 Others packed their parader's into cages like sardines and screamed like Halloween creatures at us as they drove past. 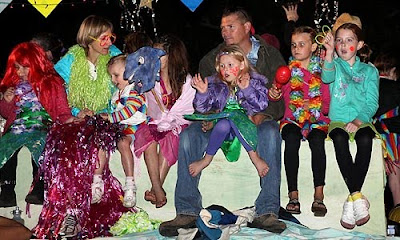 You could just see the excitement on their faces ... hardly being able to contain themselves with the jubilation of being a part of this magical event ... sort of. 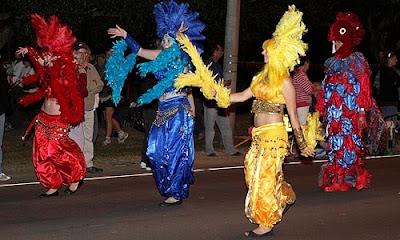 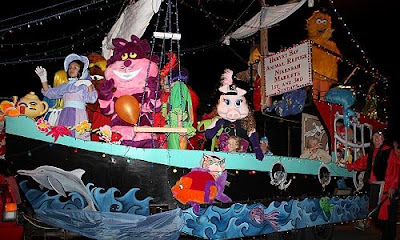 I think Miss Piggy had her eye on me ... but I really don't know what Miss Piggy is doing in a Whale Festival, other than being "Weight Challenged" like me. 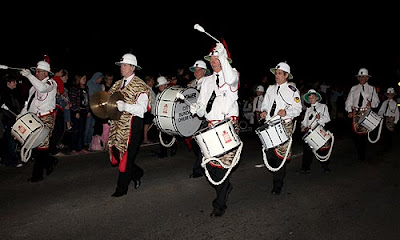 And just to make sure we hadn't nodded off ... they finished off with a marching band. 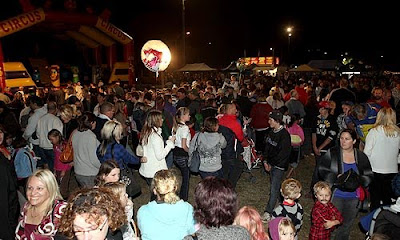 The fair grounds were a sea of people, so appropriate for a Whale Festival I suppose, but I seriously didn't think they would pack this many people into a Hervey Bay oval. Mr Whippy told me there was about 16,000 people packing into the fair this year. Imressive really. 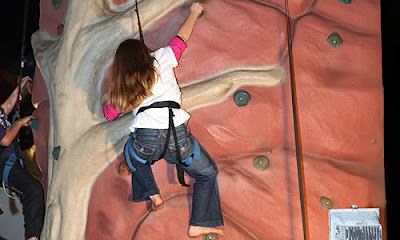 There were all sorts of ways to help throw up the Dagwood Dogs, Ice Creams, Fairy Floss and German Sausages, like Rock Climging Walls, Rides and even a Bungee Bouncer. (See Photo Album) 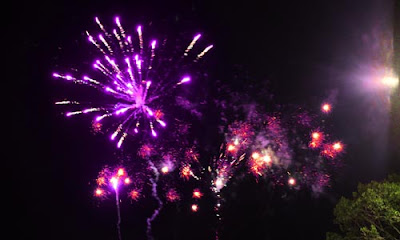 Of course, we had to finish off with a fireworks display that was ... err ... nice.
We've added another 62 photos for you to have a look at if you're interested.
MORE PHOTOS ADDED TODAY : HERVEY BAY ALBUM 9
If you would like to see some more photo's from this blog, please visit our PICASA Web Albums page!
Go To: http://picasaweb.google.com.au/styleid/HerveyBay09
Keep smiling ...
Darren & Kathy Gardiner
Posted by iDStyle at 12:07 pm No comments: 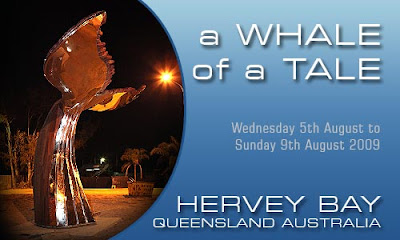 VIEW THE HERVEY BAY ALBUM (HERE)
We thought we'd give you a sneak peek into our Wedding Anniversary getaway to Hervey Bay, on Queensland's East Coast of Australia. My wife, Kathy and I have been trying to see these illusive whales for years now and we finally managed to get away for a few days ... woohoo! 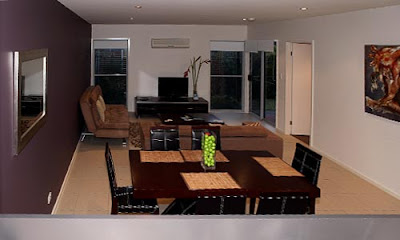 We arrived on Wednesday 5th August 2009 after a slow drive up from Brisbane, checked into the Quarterdecks Harbour Retreat (Nice), dumped the bags and headed off to enjoy a little "Curry Munching" with our good local friends Barb and Ed. Great food and great company thanks guys. We had a drive around on the way home to familiarise ourselves with the Esplanade and home to bed in the wee hours. 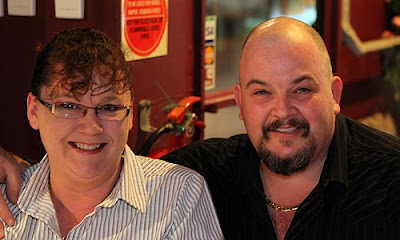 Thursday 6th was our 3rd Wedding Anniversary which started with a sleep in, lazy day, fantastic Fish'N'Chips from Shelly Beach Seafoods, afternoon coffee at the Pier and home for a freshen up before dinner at the Pier Restaurant. Awesome food (you should read the MENU), minor disaster with drinks but the staff are so attentive and the owner Steve even took our picture for us to help remember the evening and my desert came with a Sparkler, microphone announcement and a song dedicated to us by some famous old guy called Frankie ... 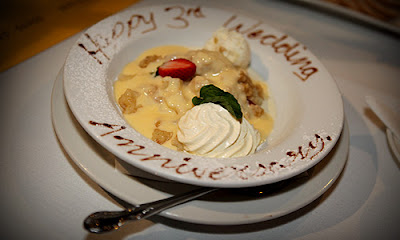 Home for a little "R&R" and another early morning finish ... 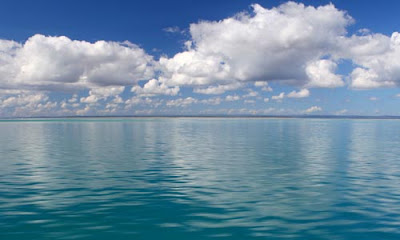 Friday was another lazy morning and off for our much anticipated Whale Watching experience, with the crew of the Quick Cat II ... nice boat, tasty lunch, great staff. 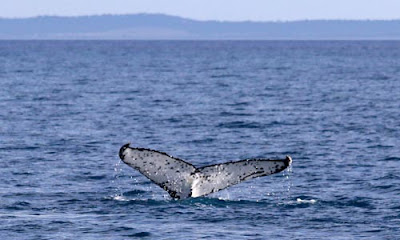 Our first Whale was just a tail in the distance but gave us something to get excited about as we were only on our way to where we were actually going ... you know ... to see all the Whales jumping and frolicking in the shadow of all the boats. 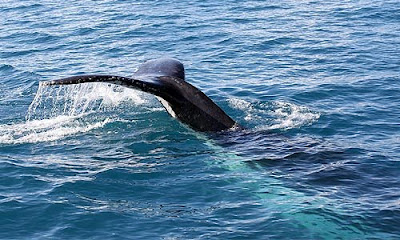 We watched and clicked for a little while before it looked like everyone was bored and we moved on ... you know ... to where all the Whales were going to be having fun in the sun. 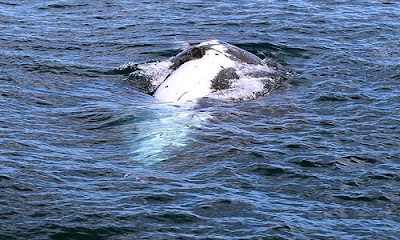 Then one rolled over to get a look at us ... 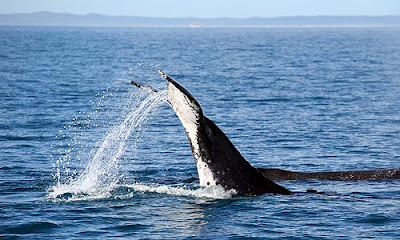 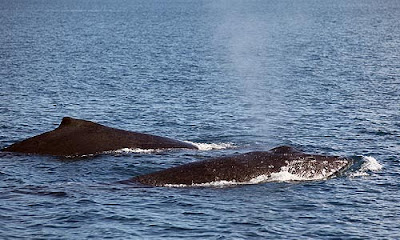 Blew off a little steam ... 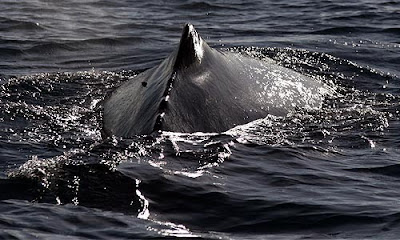 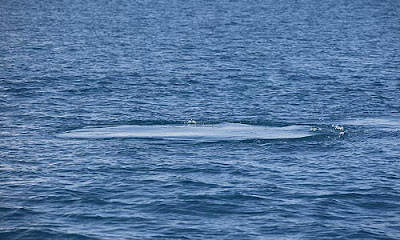 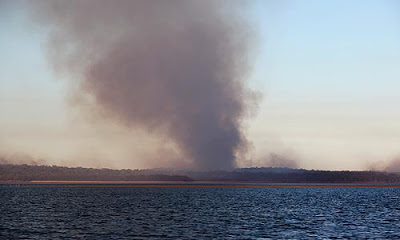 I hope nobody is planning on visiting Frazer Island at the moment as it looks like the whole place is on fire and it's hard enough to breath from a hundred kilometres away, let alone the beach. 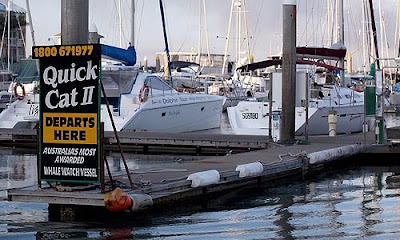 Back to the parking lot and although the boat and crew of the Quick Cat II were wonderful, the Whales weren't interested in giving us a show and we all left rather disappointed. I understand that the Whales are wild and you can never be sure what you will see, but after you've seen some of the pictures taken over the years ... seeing nothing but a few tails, a roll over and occasional blow just didn't make the day's outing an exciting one. Apparently, we're a little early for them AGAIN.
Home for a quick freshen up and then off to see some other local friends Mark and Kim from Bay Window Tinting for some Chinese and way too many Vodka's. Thanks for a great night guys.
Yes, another early morning finsh and I'm sure you can guess what I've been doing most of the day today ... updating the BLOG!
We've put up about 46 photo's for you to have a look at if you're interested.
MORE PHOTOS ADDED TODAY : NEW ALBUM 9
If you would like to see some more photo's from this blog, please visit our PICASA Web Albums page!
Go To: http://picasaweb.google.com.au/styleid/HerveyBay09
Keep smiling ...
Darren & Kathy Gardiner
Posted by iDStyle at 1:54 pm No comments: